I'm back! The Forgotten Archosaurs is not forgotten!

I'm making some changes, but I'm working on making this an active blog once more. Things to look forward to in the coming months: guest posts by archosaur workers, interviews, "forgotten archosaurs" in the news, and more!

In the meantime, here's Dromicosuchus. 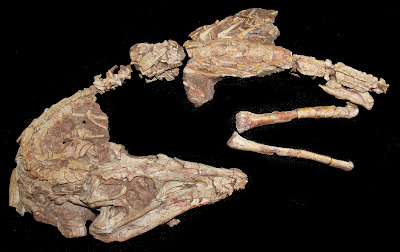 Dromicosuchus grallator was first named and described by Sues et al in 2003. It is a "spenosuchian"-grade crocodylomorph - a fleet-footed, fox-like little croc - from the Late Triassic of North Carolina. I've been working with this specimen quite a bit recently. Thanks to additional prep work, CT scanning, and new comparative material I've been discovering new aspects of the anatomy of Dromicosuchus, especially details of the braincase and forelimb. I hope to be publishing on this in the next year or 2, so stay tuned.
Posted by Susan at 9:19 PM 431 comments: 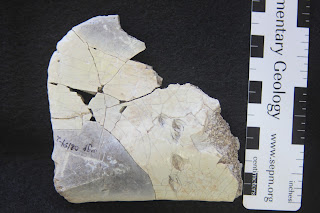 So, who was eating aetosaurs? It looks like Doug Henderson and other paleoartists were right. Postosuchus was a daunting top predator in the Triassic of North America and we can now say that this large rauisuchid had equally daunting prey.
Posted by Susan at 5:15 PM 20 comments:

New from JVP - A new poposaur and vertebrate fauna from Poland

Li et al presented on this new poposaur at last year's SVP (as I discuss here) but I'm very excited to finally see the paper, giving it a name with a full description and phylogenetic analysis. It was pretty interesting to hear that this specimen was found in marine sediments and that it possesses characters suggesting at least a semi-aquatic way of life. This new species and other like it (i.e. Qianosuchus) may suggest a strange beginning for Poposauroidea.

Abstract
A new Middle Triassic archosaur, Diandongosuchus fuyuanensis, gen. et sp. nov., is described on the basis of a skeleton from the Zhuganpo Member (Ladinian) of the Falang Formation, eastern Yunnan Province, China. It is primarily characterized by the nasal process of the premaxilla extending posteriorly well beyond the external naris, the super-sized coracoid foramen laterally bordered by the scapula, the ischium with a strongly expanded medial portion anteroposteriorly longer than the proximodistal height of the bone, and anteriorly notched cervical osteoderms. D. fuyuanensis is a pseudosuchian on the basis of the crocodile-normal tarsal joint and other features, such as the distal end of the ulna in posterolateral view squared off, osteoderms with a distinct anterior process, the presacral vertebrae dorsally covered by more than one osteoderm, dorsal osteoderm alignment dorsal to presacrals 10–24 staggered, the pubis-ischium contact reduced to a thin proximal contact, and the medial contact of the ischia extensive but the dorsal margins separate. It is from a marine deposit but shows few morphological adaptations of the postcranial skeleton for a semiaquatic way of life when compared with Qianosuchus from the Anisian limestone of the same area. A phylogenetic analysis derived from an existing data matrix suggests that the new archosaur occupies the basal-most position in Poposauroidea and further confirms the poposauroid status of Qianosuchus. On the basis of current information, the discovery of Diandongosuchus does not firmly underscore the affinity of the semiterrestrial vertebrate faunas between the eastern and western regions along the northern coastline of the Tethys.
________
Also from the new JVP is a report on a new, although rather typical, Late Triassic vertebrate fauna, which includes several archosaurs.

Abstract
We report a new site with an occurrence of isolated bones of a Palaeochersis-like turtle in Norian-Rhaetian fluvial sediments from southern Poland. The turtle remains are associated with bones of a medium-sized aetosaur, a coelophysoid dinosaur, and a larger carnivorous archosaur, as well as a hybodontid shark, ganoid and dipnoan fishes, and a large temnospondyl.
Posted by Susan at 3:36 PM 197 comments:

Phytosaurs - Some Are Real and Some Are Just Dinosaurs

Phytosaurs may not be crown group archosaurs (according to Nesbitt 2011), but they are definitely important in archosaur evolutionary history as well as Triassic ecology. Stocker's new paper increases the known diversity of phytosaurs with the description of the new species Protome batalaria and reinforces the importance of apomorphy-based identifications. Some recent accounts of partial skeletons have suggested that phytosaurs may have survived into the Early Jurassic, but Barrett and Xu re-affirm their end-Triassic demise and urge caution in identifying poorly preserved, partial remains, which tend to belong to dinosaurs.

Stocker, M. R. 2012. "A new phytosaur (Archosauriformes, Phytosauria) from the Lot’s Wife beds (Sonsela Member) within the Chinle Formation (Upper Triassic) of Petrified Forest National Park, Arizona." Journal of Vertebrate Paleontology 32(3): 573-586
Abstract
A new phytosaur taxon from Petrified Forest National Park, Arizona, is here described based on cranial material from a single individual. This specimen previously was included in an extensive phylogenetic analysis, and it was found to possess a combination of character states that differs from all known phytosaur taxa in addition to two autapomorphies within the braincase and an autapomorphy of the mandible. The new taxon adds to the taxonomic diversity recognized from the Sonsela Member of the Chinle Formation. The continued increase in phytosaur diversity emphasizes the need to more accurately characterize and identify taxa within a phylogenetic systematic context in order to produce a more refined signal for biostratigraphic correlations, biochronologic inferences, and faunal dynamics during the Late Triassic.

Barrett, P. M., and X. Xu. 2012. "The enigmatic reptile Pachysuchus imperfectus Young, 1951 from the lower Lufeng Formation (Lower Jurassic) of Yunnan, China." Vertebrata PalAsiatica 50:151-159. [Free download here]
Abstract
Phytosaurs are generally considered to have become extinct at the end of the Triassic Period, but several records have suggested that they survived into the basal Jurassic in Europe and Asia. The Asian record consists of Pachysuchus imperfectus from the lower Lufeng Formation (?Hettangian-Sinemurian) of Yunnan, China. However, this specimen differs from phytosaurs in numerous aspects and is more likely a poorly preserved, indeterminate sauropodomorph dinosaur skull. The referred specimens of this species are also regarded as indeterminate, thereby removing the post-Triassic record of phytosaurs from Asia. The European records of Jurassic phytosaurs are also shown to be doubtful, suggesting that this clade was restricted to the Late Triassic.
Posted by Susan at 12:20 AM 4 comments:

Recent Papers on Triassic Archosaurs (and Archosauriforms) and Other News

Several papers regarding Triassic archosaurs have come out recently. The first is a re-evaluation of Proterochamspia, including genera (specifically Proterochamspa) within the clade and a look at its evolutionary history. The second is an interesting look at bipedality and cursoriality in archosaurs. And finally, we have Smok, a new archosaur from Poland. The paper does not commit to which archosaur branch this new animal belongs to (since this is a topic of the author's in-progess PhD), but I would bet money that it's NOT a dinosaur.

In other news, there is a new paleo blog out there looking at the coevolution between plants and animals - Antediluvian Salad. Check it out! And while you are checking things out, head over to the Pictures tab of The Forgotten Archosaurs for some great shots of work going on in Petrified Forest National Park this summer, including the Revueltosaurus Quarry and other PEFO paleo field work.

Dilkes, D., and A. Arcucci. 2012. "Proterochampsa barrionuevoi (Archosauriformes: Proterochampsia) from the Late Triassic (Carnian) of Argentina and a phylogenetic analysis of Proterochampsia." Palaeontology (online)
Abstract
Restudy of skulls and available postcrania of the proterochampsian archosauriform Proterochampsa barrionuevoi from the Ischigualasto Formation (Upper Triassic, Carnian) in the San Juan Province, Argentina, confirms that the genus is diagnosed by autapomorphies that include dermal sculpturing consisting of prominent ridges and nodular protuberances, a large hook-like lateral projection on the quadratojugal, an antorbital fossa restricted to a depression along the maxilla, lateral expansion of the premaxilla anterior to the premaxilla–maxilla contact, absence of a supratemporal fossa, exclusion of jugal from suborbital fenestra, basal tubera of parabasisphenoid facing ventrally and reaching laterally beyond the basipterygoid process, and a ventral lamina on the angular. Proterochampsa nodosa is a valid species distinguished from P. barrionuevoi by fewer cranial ridges with larger protuberances, relatively smaller supratemporal fenestrae and width of frontals between orbits less than that of the nasals. A phylogenetic analysis supports the monophyly of Proterochampsia consisting of Proterochampsa, Chanaresuchus bonapartei, Gualosuchus reigi, Tropidosuchus romeri and Cerritosaurus binsfeldi. A temporal separation between the two basal proterochampsians with earliest records in the Late Triassic (Proterochampsa and Cerritosaurus) and Chanaresuchus, Gualosuchus and Tropidosuchus in the Middle Triassic indicates hidden proterochampsian diversity in the Middle Triassic.

Kubo, T., and M. O. Kubo. 2012. "Associated evolution of bipedality and cursoriality among Triassic archosaurs: a phylogenetically controlled evaluation." Paleobiology 38: 474–485. (online)
Abstract
Bipedalism evolved more than twice among archosaurs, and it is a characteristic of basal dinosaurs and a prerequisite for avian flight. Nevertheless, the reasons for the evolution of bipedalism among archosaurs have barely been investigated. Comparative analysis using phylogenetically independent contrasts showed a significant correlation between bipedality (relative length of forelimb) and cursoriality (relative length of metatarsal III) among Triassic archosaurs. This result indicates that, among Triassic archosaurs, bipeds could run faster than quadrupeds. Bipedalism is probably an adaptation for cursoriality among archosaurs, which may explain why bipedalism evolved convergently in the crocodilian and bird lineages. This result also indicates that the means of acquiring cursoriality may differ between archosaurs and mammals.

Niedźwiedzki, G., T. Sulej, and J. Dzik. 2012. "A large predatory archosaur from the Late Triassic of Poland." Acta Palaeontologica Polonica 57 (2): 267-276. (online)
Abstract
We describe a new large predatory archosaur, Smok wawelski gen. et sp. nov., from the latest Triassic (latest Norian–early Rhaetian; approximately 205–200 Ma) of Lisowice (Lipie Śląskie clay−pit) in southern Poland. The length of the reconstructed skeleton is 5–6 m and that of the skull 50–60 cm, making S. wawelski larger than any other known predatory archosaur from the Late Triassic and Early Jurassic of central Europe (including theropod dinosaurs and “rauisuchian” crurotarsans). The holotype braincase is associated with skull, pelvic and isolated limb−bones found in close proximity (within 30 m), and we regard them as belonging to the same individual. Large, apparently tridactyl tracks that occur in the same rock unit may have been left by animals of the same species. The highly autapomorphic braincase shows large attachment areas for hypertrophied protractor pterygoideus muscles on the lateral surface and a wide, funnel−like region between the basal tubera and basipterygoid processes on the ventral surface. The skeleton (cranial and postcranial) possesses some features similar to those in theropod dinosaurs and others to those in large crocodile−line archosaurs (“rauisuchians”), rendering phylogenetic placement of S. wawelski difficult at this time.
Posted by Susan at 4:26 PM 10 comments: