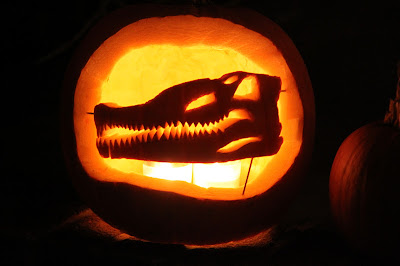 Happy Halloween Everyone! This year, I decided to carve my pumpkin as Smilosuchus. I got a lot of compliments from trick-or-treeters, although a lot thought it was a dinosaur. A few managed to guess it was a crocodile, which I figured was close enough for 8-year-olds. Did anyone else carve paleo-inspired pumpkins?

The annual meeting of the Society of Vertebrate Paleontology is just one week away. Incorporated into the logo for this year's meeting is the Nevada state fossil, Shonisaurus popularis, a Late Triassic ichthyosaur, as well as the dinosaur track Eubrontes (the suit on the cards).
There will be no shortage of talks and posters on "forgotten archosaurs" at this years meeting. On Wednesday, there will be a handful of general archosaur talks in the morning and afternoon. Thursday talks will be sparse, but there will be dozens of good posters. All day Friday and Saturday morning are almost completely devoid of non-dinosaurian archosaur talks, but Saturday afternoon will bring us the croc talks. Not a bad way to end the meeting.
A message from the Student & Post-Doctoral Liaison Committee
As a member of the committee, I have a small request to ask of my lovely readers: PLEASE BRING LOTS OF REPRINTS! Each year, the S&PLC hosts the Student Roundtable Forum and Reprint Exchange. We rely entirely on generous donations from SVP members for reprints so, if you have a bunch of reprints sitting around your office and wouldn't mind contributing, please bring them to the meeting. You can bring them to the S&PLC table, where we will be selling raffle tickets and offering guidance to first time attendees.
Each year, the student committee sells raffle tickets for a chance to win a free student membership or fabulous door prizes. Not a student? You can still buy a raffle ticket (or 20) and donate it to a student. Proceeds benefit the SVP Education and Research Fund. More info can be found at the annual meeting website.
Posted by Susan at 4:59 PM No comments:

Background
Archosaurs (birds, crocodilians and their extinct relatives including dinosaurs) dominated Mesozoic continental ecosystems from the Late Triassic onwards, and still form a major component of modern ecosystems (>10,000 species). The earliest diverse archosaur faunal assemblages are known from the Middle Triassic (c. 244 Ma), implying that the archosaur radiation began in the Early Triassic (252.3–247.2 Ma). Understanding of this radiation is currently limited by the poor early fossil record of the group in terms of skeletal remains.

Methodology/Principal Findings
We redescribe the anatomy and stratigraphic position of the type specimen of Ctenosauriscus koeneni (Huene), a sail-backed reptile from the Early Triassic (late Olenekian) Solling Formation of northern Germany that potentially represents the oldest known archosaur. We critically discuss previous biomechanical work on the ‘sail’ of Ctenosauriscus, which is formed by a series of elongated neural spines. In addition, we describe Ctenosauriscus-like postcranial material from the earliest Middle Triassic (early Anisian) Röt Formation of Waldhaus, southwestern Germany. Finally, we review the spatial and temporal distribution of the earliest archosaur fossils and their implications for understanding the dynamics of the archosaur radiation.

Conclusions/Significance
Comprehensive numerical phylogenetic analyses demonstrate that both Ctenosauriscus and the Waldhaus taxon are members of a monophyletic grouping of poposauroid archosaurs, Ctenosauriscidae, characterised by greatly elongated neural spines in the posterior cervical to anterior caudal vertebrae. The earliest archosaurs, including Ctenosauriscus, appear in the body fossil record just prior to the Olenekian/Anisian boundary (c. 248 Ma), less than 5 million years after the Permian–Triassic mass extinction. These earliest archosaur assemblages are dominated by ctenosauriscids, which were broadly distributed across northern Pangea and which appear to have been the first global radiation of archosaurs.
Posted by Susan at 5:32 PM No comments: