Last week, I got a chance to visit the North Carolina Museum of Natural Sciences. Next fall, I will be joining the NC State Biology Department as a grad student and a lot of my research will be done at the museum. My visit included a tour of the collections where I got to see many amazing crurotarsan specimens including the holotypes of Postosuchus alisonae and Dromicosuchus grallator, as well as many great specimens of Deinosuchus. 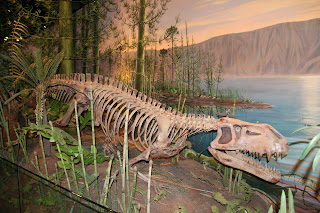 Postosuchus alisonae was discovered in 1994 in a brick quarry in the Deep River Basin of the Newark Supergroup. The abdominal region included stomach contents preserving remains of at least four different taxa. Underneath Postosuchus they found a partially articulated skeleton of a crocodylomorph, Dromicosuchus grallator, bearing teeth marks on its skull and neck. These specimens provide a unique window into the ecology of the Newark and have the potential to tell us much more.
A replica of Postosuchus is on display in the main fossil hall of the museum, but a new wing that will feature some of the amazing real specimens is nearing completion. The Nature Research Center will open next month (April 20th), helping to make scientific research more accessible to the public, and will be featuring a lot of the exciting work that the museum is doing with the Triassic. Postosuchs and Dromicosuchus are just the start. 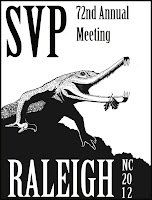 For those of you who are members of the Society of Vertebrate Paleontology, I hope to see you all at the annual meeting in October, since it is being hosted by the NC Museum of Natural Sciences. I highly recommend that all my other readers make an effort to visit the museum as well. Admission is free and you'll get to see all the exciting research being done on Triassic archosaurs (and other critters). Also, to all the preparators out there, the museum is looking for a curatorial technician/ assistant lab manager (link to job listing). Fair warning, that Triassic mudstone is tough stuff.