This is still the same blog, I just updated the template.

Let me know what you think. Do you like the new layout? Should I go back to the old one?
Posted by Susan at 12:03 PM 6 comments:

Two New Neosuchians from the Mesozoic of Europe


Abstract:
Metriorhynchidae is a clade of marine-adapted crocodilians known from several Middle Jurassic–Early Cretaceous specimens collected predominantly in South America and Europe, but poorly known in the northern margin of Gondwana. The “Portomaggiore crocodile” is the most complete specimen of an Italian metriorhynchid to date: it consists of a partial skeleton that has been provisionally referred to an unnamed species of Late Jurassic Metriorhynchus or Geosaurus. The specimen is preserved in the reddish, nodular limestone of the Rosso Ammonitico Veronese Formation (Bajocian–Tithonian); new data on microfossil associations constrain the age of the metriorhynchid to the late Bajocian–earliest Bathonian. On the basis of cranial synapomorphies, the “Portomaggiore crocodile” falls as the closest sister-taxon of the Late Jurassic– Early Cretaceous geosaurines, and is referred to Neptunidraco ammoniticus gen. et sp. nov. It is unique among Middle Jurassic metriorhynchids in showing an incipient streamlining of the skull, shared with Late Jurassic and Cretaceous taxa. Since Neptunidraco is the oldest known member of Metriorhynchidae, its phylogenetic position supports the hypothesis that the timing of the initial metriorhynchid and geosaurine diversifications should start in the Bajocian.

Abstract:
Small terrestrial non-eusuchian mesoeucrocodylians are common components of Cretaceous assemblages of Gondwanan provinces with notosuchians and araripesuchids as flagship taxa in South America, Africa and Madagascar, well into the Late Cretaceous. On the other hand, these are exceedingly rare in Laurasian landmasses during the Late Cretaceous. Small terrestrial mesoeucrocodylians from Europe were often referred to the genus Theriosuchus, a taxon with stratigraphic range extending from the Late Jurassic to the late Early Cretaceous. Theriosuchus is abundantly reported from various European localities, although Asiatic and possibly North American members are also known. It has often been closely associated with the first modern crocodilians, members of the Eusuchia, because of the presence of procoelous vertebrae, a widespread key character diagnosing the Eusuchia. Nevertheless, the relationships of Theriosuchus have not been explored in detail although one species, Theriosuchus pusillus, has been extensively described and referred in numerous works. Here, we describe a new basal mesoeucrocodylian, Theriosuchus sympiestodon sp. nov. from the Maastrichtian of the Haţeg Basin, Romania, suggesting a large temporal gap (about 58 myr) in the fossil record of the genus. Inclusion of the new taxon, along with Theriosuchus guimarotae, in a phylogenetic analysis confirms its referral to the genus Theriosuchus, within a monophyletic atoposaurid clade. Although phylogenetic resolution within this clade is still poor, the new taxon appears, on morphological grounds, to be most closely related to T. pusillus. The relationships of Atoposauridae within Mesoeucrocodylia and especially to Neosuchia are discussed in light of the results of the present contribution as well as from recent work. Our results raise the possibility that Atoposauridae might not be regarded as a derived neosuchian clade anymore, although further investigation of the neosuchian interrelationships is needed. Reports of isolated teeth referable to a closely related taxon from the Upper Cretaceous of Romania and France, together with the presence of Doratodon and Ischyrochampsa, indicate a previously unsuspected diverse assemblage of non-eusuchian mesoeucrocodylians in the Late Cretaceous European archipelago.
Posted by Susan at 11:02 AM 6 comments:

My lovely blog has just been recognized by the University of Maryland's College Park Scholars Program (CPSP) in a short news blurb. I participated in the program in my first two years at the university but stayed involved for all four years of my undergraduate career.

I certainly do credit Drs. Holtz and Merck for my knowledge of Crurotarsans and website development (even though blogger.com does most of the work as far as the website itself, I can do a lot more with my knowledge of html code). I am well known for my my praise of Dr. Merck, Dr. Holtz, and the Earth, Life, & Time program (example), so I wont start again here, but the College Park Scholars Program deserves a lot of credit too for the quality it adds to both life and education at the University of Maryland. So thanks CPSP!!! Keep up the good work and your students will follow. 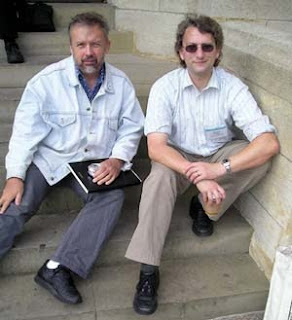 Crocs in the News

No Death Roll for these Crocs:
Ancient Crocs May Have Chewed Like Mammals 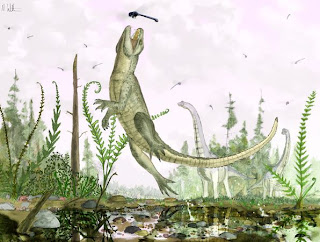