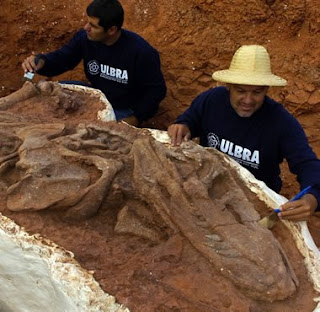 I got the word yesterday from Marcel Lacerda of the Universidade Federal do Rio Grande do Sul, Instituto de Geociências, that a nearly complete skeleton of Prestosuchus has recently been found in southern Brazil.  You can read the original article (in Portuguese) here, or, I have made my attempt at translating it into English below.

"Brazilian researchers found the fossil of a prehistoric predator in excellent condition near a town 260 km from Porto Alegre. A reptile, classified as Prestosuchus chiniquensis, lived 240 million years ago, before the appearance of the dinosaurs. It is the most well preserved fossil of the major predator of the Middle Triassic. A paleontologist of the Universidade Luterana do Brasil (Ulbra) Sergio Cabreira and a biologist, Lucio Roberto da Silva combed a ravine where two fossil vertebrae had already been found; they then saw the should blade of a Prestosuchus recently uncovered by the rains. After they removed some of the sediment, they uncovered parts of the skull, forearms, and chest.

Prestosuchus belonged to a group of basal archosaurs - predators that preceded the dinosaurs, pterosaurs, and crocodiles in the tree of evolution. Morphologically, the fossil is more similar to an alligator; it walked on all fours, had a long tail, and a long snout. But it walked upright. Researchers estimate that it weighed 1 ton and was about 7 meters long and 1.5 meters tall."

Not the most scientific of articles (especially the part about Prestosuchus living BEFORE dinosaurs appeared), but a good briefing on such a recent discovery. Prestosuchus is probably my favorite extinct animal (and I'm guessing you're all fans as well), so it will be very exciting to see this develop. Would you just look at that beautiful skeleton!


Thank you Marcel! I hope my translation was fairly accurate.