My 10th and final week at PEFO was actually spent mostly outside of PEFO, at Ghost Ranch in New Mexico. At the last minute (with a little pushing from Bill), we interns decided to go join the fun (Bill had wilderness training, so he couldn't join us). We left late on Sunday, arriving Monday morning. We arrived just in time to meet up with Alan Turner, Michelle Stocker, and crew as they surveyed the lab and quarry. We would be working in the Hayden Quarry (know for its wealth of data associated with dinosaur origins as well as from the paintings of Georgia O'Keefe) and would soon be joined by a rather large field crew comprised of paleontologists from University of Utah (Randy Irmis et al), UC Berkely (Kevin Padian et al), and several other institutions. Due to the large number of people, Rachel, Chuck, and I would have to camp at the quarry instead of the Ghost Ranch campsite.

Last year, they had started working on a large block of Typothorax material, so our fist goal was to get that ready to be pulled out. Step 1 was cleaning off all the material that had fallen from the quarry wall over the year (lots and lots of shoveling involved). Then we had to add several more layers of plaster and continue excavating around the base of the jacket. This took quite a while because of the amount of bone that was in the rock around and underneath the jacket. We just collected the bone on top of the jacket whilst removing the "underburden" (read Bill's post on when a large quarry block becomes furniture). 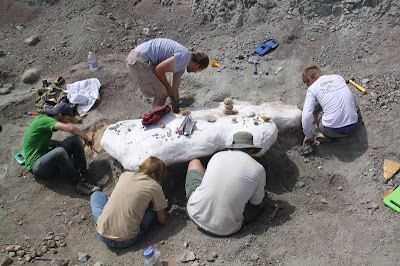 Unfortunately, we couldn't stay for longer than a few days. And although we were still working in the Chinle Formation, it was a vastly different experience compared to working the Chinle of PEFO. We returned to the park in time for me to get to spend one last day in the field. Reflecting on those 10 weeks, I can certainly say that the Chinle can be a frustrating formation to work in but its wealth of data us well worth it. I just hope that I get to spend many more field seasons working in the Chinle, especially the PEFO Chinle.
Posted by Susan at 5:49 PM