For those of you who missed this year's meeting of the Society of Vertebrate Paleontology, don't feel too bad. There were plenty of good talks this year, but also a fair share of disappointments.

I'll start with what was good about this meeting. At the business meeting, it was announced that of all the abstracts submitted on archosaurs, the dinosaurs were far outweighed by the non-dinosaurs - good news for those of us who are fans of the "forgotten archosaurs". I will be following this post with several summarizing the information presented on archosauromorphs, Triassic pseudosuchians/crurotarsans, and crocodylomorphs. The exhibitors this year had some good items for croc fans, including a life-size Sarchosuchus skull (Bone Clones, Inc) and prints of the mural from the Petrified Forest Rainbow Forest Museum (Paleovista), featuring the Adamanian (Triassic) fauna of the Chinle Formation (including Smilosuchus, Postosuchus, Desmatosuchus, and many others).

This year's meeting was somewhat disappointing due to a complete lack of food and the choice of venue. Las Vegas (especially a casino) is one of the last places I think of when I hear "academic/professional conference". Most of the people I spoke to felt sick all week, but no one could tell if they had a cold or if it was just the dry, cigarette smoke-filled air that was making them feel crummy.

I think we can all agree that we're looking forward to next year's meeting in Raleigh (there's a phytosaur on the logo!). 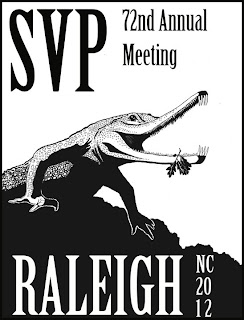