This year's meeting turned out to be the largest meeting on record at 1,190 attendees and at last count 761 abstracts submitted, the previous record holder being Austin, Texas in 2007. The 28th Annual Benefit Auction and Social went wonderfully, raising $18,500 dollars for the SVP Education and Research Fund. The theme was Star Trek, but we had bets going for the following themes: Lady Gaga, Avatar, Iron Man (and other such super heroes), Alice In Wonderland, and so on. 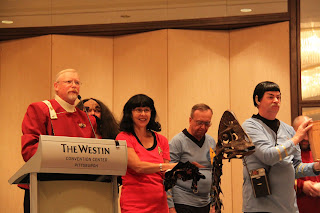 Although there was no banquet this year, they still held the awards ceremony to a full room. Here are the winners of the two big awards:

Alfred Sherwood Romer Prize
"The Alfred Sherwood Romer Prize recognizes an outstanding scientific contribution in vertebrate paleontology by a predoctoral student. Selection for participation in the Romer Prize Session at the SVP Annual Meeting is based on the scientific value and quality of an abstract summarizing an original research project, and the Romer Prize is awarded on the basis of the scientific value and quality of the oral presentation of that research during the Romer Prize session a the SVP Annual Meeting."
Winner: Jennifer Olori for her presentation on "DEVELOPMENTAL FEATURES OF MICROSAURS (LEPOSPONDYLI), AND CONSEQUENCES FOR THE EVOLUTION OF DEVELOPMENT AND PHYLOGENETIC RELATIONSHIPS WITHIN TETRAPODA"

Congratulations to all of the award winners!

And we can't forget the after party, which concluded with Dr. Tom Holtz leading everyone in Walk The Dinosaur. 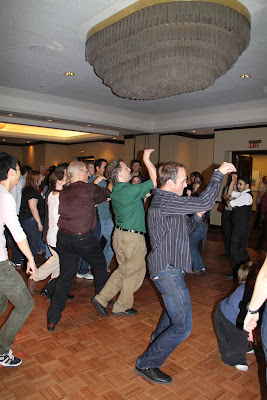 One last thing:
The issue of the embargo policy has come up with my coverage of the meeting, so for clarity's sake, I have included the policy below. That being said, there are always embargo policies of other publications and institutions to consider, as well as the wishes of the scientists whose work is being presented. Therefore, if anyone ever wishes for content to be removed from the blog, for any reason (although some reason is preferable), I will be happy to remove it (or change it) ASAP. Just shoot me an email. Jeopardizing someone's career is the last thing I want to do.

SVP Embargo Policy:
"Unless specified otherwise, coverage of abstracts presented orally at the Annual Meeting is strictly prohibited until the start time of the presentation, and coverage of poster presentations is prohibited until the relevant poster session opens for viewing.  As defined here, “coverage” includes all types of electronic and print media; this includes blogging, tweeting and other intent to communicate or disseminate results or discussion presented at the SVP Annual Meeting. Content that may be pre-published online in advance of print publication is also subject to the SVP embargo policy."
Posted by Susan at 3:56 PM