The annual meeting of the Society of Vertebrate Paleontology has been great so far. Pittsburgh is a gorgeous city, with the David L. Lawrence Convention Center overlooking the Allegany River, and the weather has been perfect.

The representation of Crurotarsi at the meeting has started out slow. On Saturday evening, there was a get together of croc workers (mostly Chris Brochu and students) that I attended, but being held in a bar, little discussion of crocs actually took place. Sunday had just about the same amount of crurotarsan content, with only two posters (although quite excellent posters) discussing vertebrates of the Chinle Formation (Petrified Forest area, Arizona):
Sunday evening was the welcome reception at the Carnegie Museum, which I believe illustrates my reason for naming this blog "Forgotten Archosaurs" quite well. The showcase exhibit of the museum that night was Dinosaurs in Their Time, the Mesozoic hall. After you pass Herrerasaurus to enter the hall, you are greeted by none other than Redondasaurus (shown below). 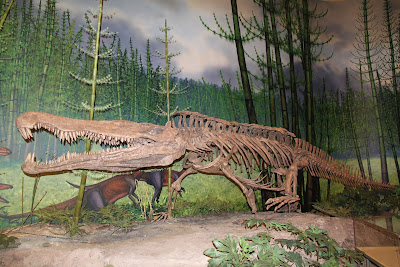 There are two other skulls of crurotarsans and a shale slab with a squished thalattosuchian to be found in the entire hall. And so, a clade that so dominated the landscape and overshadowed the dinosaurs for the first 50 million years of the Mesozoic and still retained quite a presence (especially in the marine realm as Thalattosuchia and Dyrosauridae) for the remainder of the era, is represented by only 4 species and only one full mounted display, in a hall called Dinosaurs in Their Time. So maybe they aren't entirely forgotten, but "incredibly unappreciated archosaurs" doesn't sound as catchy. And at least the Nile croc got a cool display in the Cenozoic hall (aka. the Mammal Hall...). 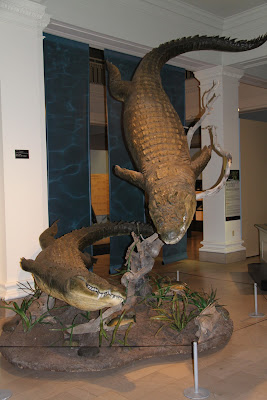